It’s important to know where your from.  It’s also important that where you’re from recognises and values you.

We started this week with a political map of Birmingham, showing boundaries about to change, discussed why they were changing, discussed the biggest change in Birmingham Political history in 1911, when the Greater Birmingham Act made us ‘the second city’, and the biggest national political change on February 6th 1918, when the Representation of the People Act was signed on 6th February 1918, giving the right to vote to most men and, for the first time, some women.

Birmingham played a key role in suffrage campaigning leading up to 1918, and after that date in 1918, campaigning for the extension of the Act to include all adult men and women. 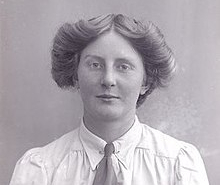 We reviewed a sample of images of suffragettes, suffragists, and some of the key events in Birmingham relating to suffrage.   The Archive club were particularly drawn to two images – one of suffragette flyer showing women being force fed in Winson Green.  The other was the novel approach taken to meeting Prime Minister Asquith – by posting themselves to 10 Downing Street.  A question we couldn’t answer – is it still possible to post yourself?