Mrs Gibbs has worked at Paganel Primary School since the school changed from being two separate schools to one, and helped saved our earliest archives from literally being thrown away. END_OF_DOCUMENT_TOKEN_TO_BE_REPLACED

How Paganel Primary School is playing its part to remember the First World War, 100 years on.

In November, earlier in the year, Paganel Primary School’s Year 5 classes visited Lodge Hill Cemetery as part of a project with the Big Ideas Company to commemorate those who died in the First World War and are buried at Lodge Hill.

We researched a number of soldiers buried at Lodge Hill, and the pupils took part in a number of activities to locate and learn more about these individuals, to help to connect them with the events of 100 years ago.

END_OF_DOCUMENT_TOKEN_TO_BE_REPLACED

It’s important to know where your from.  It’s also important that where you’re from recognises and values you.

We started this week with a political map of Birmingham, showing boundaries about to change, discussed why they were changing, discussed the biggest change in Birmingham Political history in 1911, when the Greater Birmingham Act made us ‘the second city’, and the biggest national political change on February 6th 1918, when the Representation of the People Act was signed on 6th February 1918, giving the right to vote to most men and, for the first time, some women.

END_OF_DOCUMENT_TOKEN_TO_BE_REPLACED

Following the interviews, we decided to go out into the playground and photo some of the things discussed.  Here are some of the comments:

‘This is where the foxes live – we’re not allowed to go too close.’

‘We use the tables for hiding under – they have games on top.’

‘When we were little we got to go the little playground.  We’ve not been here for years!’

‘In year 2 we did PE here [the small playground]’

‘I remember growing vegetables and eating them. Make soup and parents had to try it.’
‘In nursery we used to play on the bikes.  Brings back memories of crashing into the wall and hurting myself, so many times.’

We ran a series of short interviews with students about what it’s like being at Paganel School.  Paganel Archives club talked about lunchtime, the playground, discipline at the school among other things – have a listen to the interviews below:

With Birmingham securing the bid to host the Commonwealth Games in 2022, the Archive After School Club decided to look back on another major national sporting event; the 2012 London Olympics.  This post is written by Tom Jordan. END_OF_DOCUMENT_TOKEN_TO_BE_REPLACED

On 10th November our Year 5 visit to Lodge Hill Cemetery using in soldiers footsteps to find out about World War One in Birmingham. Afterwards we asked a teacher and some of the children about the visit.  Video and sound clip are brief edited responses: END_OF_DOCUMENT_TOKEN_TO_BE_REPLACED

This blog post is about the start of Archive Club for this school year, what has changed and what there is to look forward to. It was written by Tom Jordan. END_OF_DOCUMENT_TOKEN_TO_BE_REPLACED

‘It’s the best trip we ever had because it was four trips all together’.

This blog is about the University of Birmingham visit by Paganel Primary Year 6 and was written by Archives After-school club, yr6:

We went to University of Birmingham and looked around ‘Old Joe’ the clocktower and walked around the old building.  The clock tower has LED lighting so it can go different colours.

Then we went to the Barber Institute, in the middle of the University.  It was very nice because Mrs Barber donated so many pictures and still helps it run after she’s died. 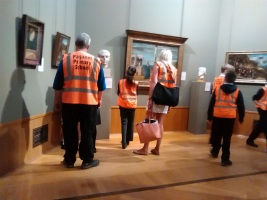 We looked more at some of the self-portrait paintings.  It was interesting to find out what they meant.  Like the one where the man was in black and holding a skull.  When you look at it at first it’s just a portrait, but when read what’s underneath and look a little harder you can see more what it means.

One picture was unknown who it was, and it was a picture of a woman who had sorrow on her face.  I was curious about who it might be and why they were sad, because there wasn’t much known about it.

There was a painting of Jesus with the dark soldier next to him.  It looked like a demon behind him, all black with a scary face.  I like scary stuff, it’s fascinating and I want to know more about it.

‘Then we went to the archives.  This was my favourite bit.’

When we visited the people at Cadbury Research Library.  They had all the archives locked up downstairs, all protected.  They showed us how they conserved it by bathing the paper in water.  They ‘relaxed’ the paper by spraying it before the bath (see photo top of page). 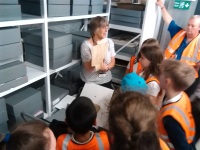 We also saw a letter written by Neville Chamberlain to Adolf Hitler before the second world war, as well as lots of other archived things. 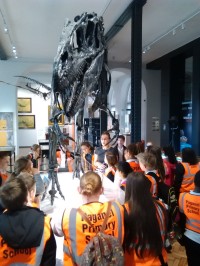 At the Lapworth museum we met Roary the Allosaurus.  He broke two bones in his ribs and toe, so he couldn’t fight and he couldn’t eat,  and that’s why he died.

I liked the crystals, the stuffed animals and the fossils.  There was a stuffed possum too.

Make sure you visit the University and all the free places you can go and find out things too.

Please visit uni and see more of our photos in our archive, or see last year’s visit blogpost. 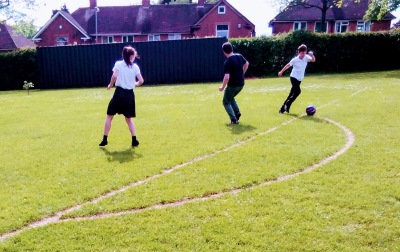 I asked our Year 6 Archive After-school club members three questions about what they want to do, where they want to live and a favourite moment or advice for people starting Paganel.  Here’s what they said:
END_OF_DOCUMENT_TOKEN_TO_BE_REPLACED